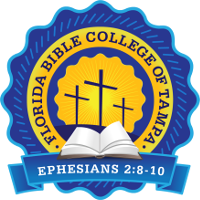 Copyright © 2016 Florida Bible College of Tampa, Inc. All rights reserved.
All Trademarked and/or Copyrighted content are the property of their respective owners.